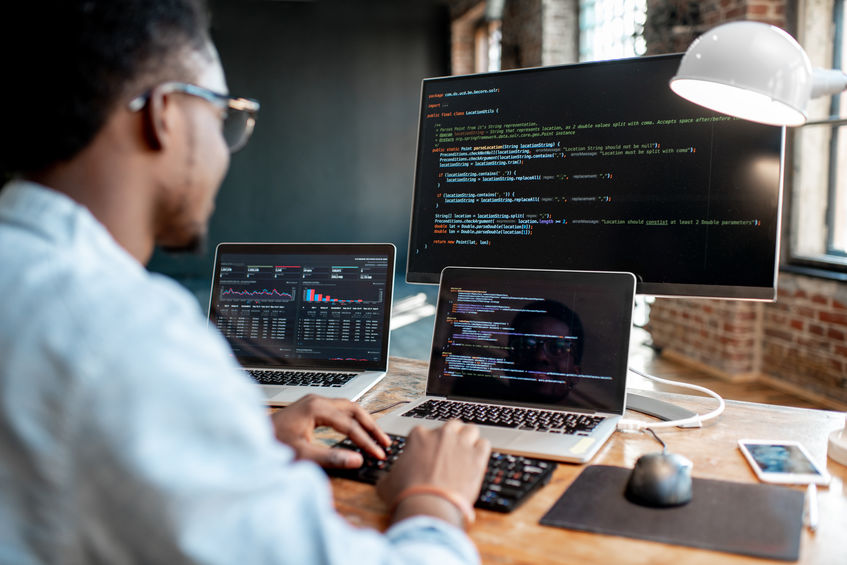 This is the second part of a number of articles about a new system that needs to be built. The Intro starts with the theory and in subsequent articles (panels) it will show the actual progress on the build. This series may go on for months, depending on market developments, technological developments and budget restraints.

CS6 is out. Kepler is out. Great news so far, but…

Kepler video cards are not yet supported for the AE Ray-tracing 3D rendering, due to lacking functionality that is not included in the current driver library. Adobe is working on that but it is unclear how long that will take. Another issue is that the much touted Maximus solution, where one can use both a video card and a Tesla C2075 card to improve video performance is limited to Quadro cards only. It simply will not work with a GTX card like the 570/580/680.

Simply put, a Tesla C2075 card, with only 448 CUDA cores to perform the hardware acceleration at an extravagant price plus a Quadro card does not make much sense to me yet. I’m waiting for Adobe to show me wrong here, but with the current price tag for both the Tesla and the Quadro, I think I will remain with a GTX card, it just does not seem worth the almost 7-fold price over a top-of-the-line Kepler 680, even if I have to wait for Adobe to get the Ray-tracing 3D rendering issue solved. So far all Quadro cards have only excelled in their price, not in their performance.

From many stories, the memory controller on the i7-3930K, my initial choice of CPU, seems rather finicky and especially when overclocking. It seems to be very important to only use 1.35V sticks and preferably without Micron chips on these sticks, but with the current state of affairs the choice seems to be limited to Samsung 4 GB sticks and that sucks…

With 8 sticks that would limit me from the outset to only 32 GB memory and I intend to use 64 GB, because AE can very nicely use all that extra memory and even though PR does not need as much memory or use memory as effectively as AE, it can still be put to good use in the form of RAM cache.

At this moment the only DDR3-1600 64 GB kit I can get here are the G.Skill Ripjaws Z Series. which are qualified for the Asus P9X79 WS mobo, even though they are 1.5V.

I have finally received the case that I was waiting for. Let it be explicitly stated that this was my own fault. I was doubting what to order, but once ordered Jim was extremely fast in delivering. Any delay was my fault, not CaseLabs. It is huge, and I mean really huge. It can easily house a couple of mid towers and then some. For instance this case is almost three times bigger than a CoolerMaster HAF 912 Plus and more than twice as big as my Lian-Li PC-A77 case.

The initial doubts with this case were what to order? The transport costs are sizable, there is no European dealer and you have to order it in California, so you must make sure you have all the components you will need in one order.

The case comes with four MAC-125 mounts to accommodate the installation of two BR burners, a multi-card reader and a Chieftec 4 x 2.5″ drive bay. I also wanted a Caster kit, so moving the heavy case around is a bit easier. Even though it increases the height of the case somewhat (67 mm), it still fits under my desk, but I have to check the airflow from the top fans to the outside because of the intended cooling.

In comparison to my Lian-Li PC-A77 case, which is considered a big tower by everybody, this case is huge. Keep in mind that this Lian-Li case on the left has 14 3.5″ HDD’s at the front plus two 5.25″ BD-R burners, so it is not very small. The Magnum is way bigger, but that explains the name. It hardly fits under my desk. Notice the four 120mm fans openings behind the mesh on the PSU side.

Next I needed three MAC-127 5.25″ Device Mounts for the Chenbro drive cages and at least two Quad 120mm Fan Mounts, to install 4 120mm fans, once on the mobo side for air intake and once on the PSU side. Here you see the drive cages installed. Also take note of the many options there are for proper cable management, with the PSU(‘s) on the other side of the case.

But that is not all. On the other side of the case, the PSU side, there are cage assy’s for 16 more 3.5″ disks. I needed three standard HDD Cage Assy’s (MAC-101) for the installation of 12 HDD’s on the PSU side of the case. Initially I considered four of these, but I figured that with 12 HDD’s on the PSU side and 15 HDD’s on the mobo side, making for 27 3.5″ HDD’s in total, plus 4 x 2.5″ disks, that will be enough to start with. Luckily Jim shipped my case with four of these MAC-101’s. With some mods, I can easily add a couple of cage assy’s to increase the number of 3.5″ disks to around 40 or more if I feel so inclined. 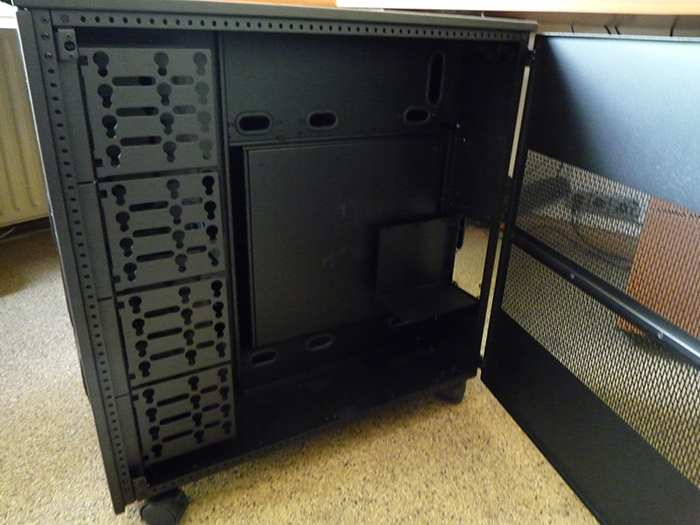 All these cage assy’s have space for a 120mm intake fan. In addition I needed a MAC-123 PSU Support Bracket. Apart from exhaust fans all that needs to be installed on this side is one (or two) PSU’s, but I think that one will suffice in my case. The support bracket is already installed. 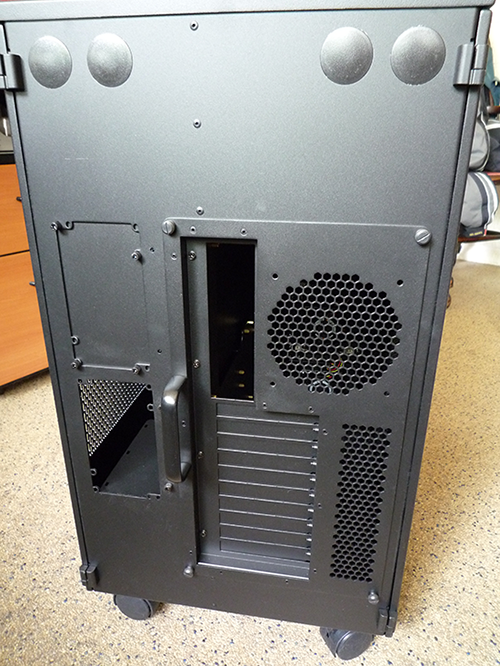 The hinged doors make for very easy access to the case.

Another very nice feature of this case is the so called Tech Station. This means that you loosen four thumb screws and slide the complete motherboard-tray out of the case for easier installation of motherboard, CPU, cooler, RAM, cards and when finished, slide it back in and fasten the thumb screws again. 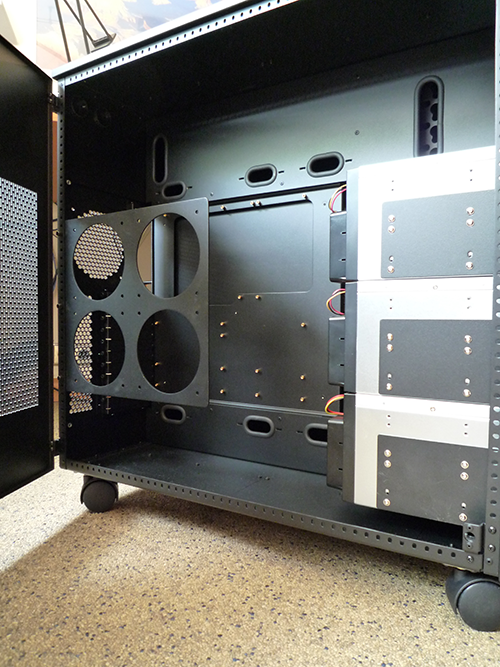 The top fans will be used for air exhaust. With room for 8 120mm fans at the top and 8 at the bottom, a real tornado may be the result. It may be deafening, but that will have to show when we get into cooling this monster. 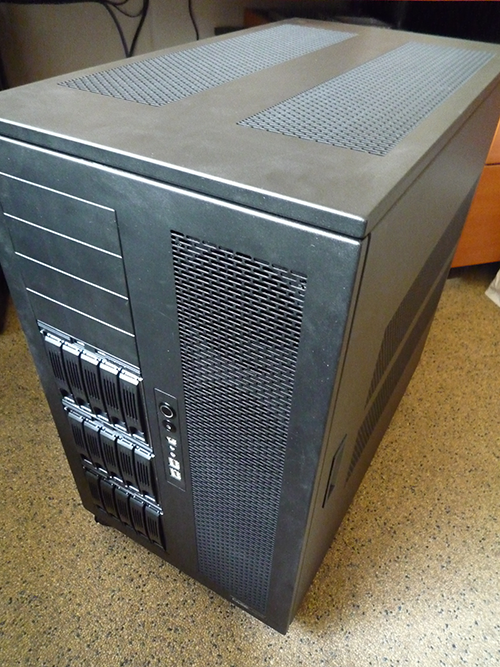 I have seen many cases in the past years, but this is absolutely the best case I have ever seen by far. The build quality, the eye for details, the ease of use, the huge amount of space, all put this case at the ultimate top. NASA would endorse this quality in an eyeblink. But there is more to say about CaseLabs. Not only is the case superb, but both in pre-sales and in after-sales, Jim Keating does a fabulous job in helping you get the exact case you need. Prompt replies to questions, to-the-point and the delivery is fast and the packaging of the shipment, the protection of the case, is very good as well.

The Chenbro cages have arrived. It will give me room to add 15 hot-swappable HDD’s on the mobo side of the case and in combination with the HDD Cage Assy’s mentioned above that should do for the time being. But I have to figure out whether the included fan on the back of the cage is any good in terms of noise or whether it is better to replace them. In the next article I will consider cooling and then tell you whether the fans on these Chenbro drive cages are any good and whether they need to be reversed for proper air-flow. Standard fans on these cages are the Y.S. Tech FD128032HB 8cm fans, which are set up to suck in air from  the outside into the case with a CFM rating of 46.9, but with a huge 45 dBA sound level. These fans are just not acceptable, they are far too noisy and I have to figure a better solution. 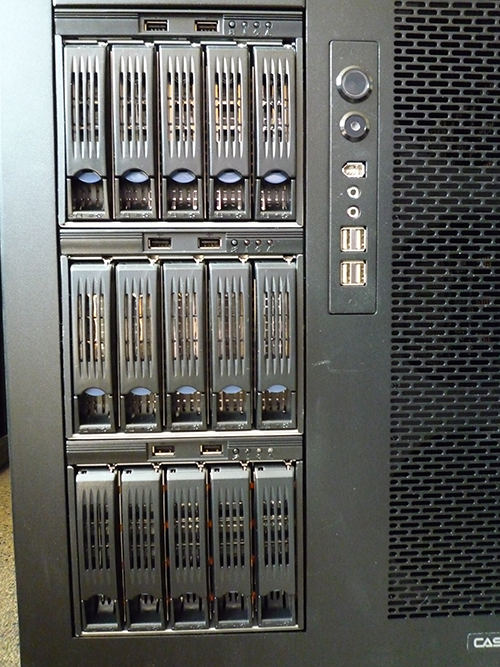 As you can see from the picture above, the three Chenbro drive cages have been installed, but I’m still waiting for the rest of the components. Meanwhile the Icy Dock hot swap 4-in-1 drive cage has also arrived and has been installed.

The major disappointment at this moment is that drive prices have not declined yet to pre-flooding levels, so with at least 15 hot-swappable new drives at one side of the case, and some of my existing drives on the PSU side, it will seriously add up.

Planning & Building a NLE System – About the PSU